The most frail character in Coin Crypt, the Archer also boasts the most offensive potential. With only 1 Max HP, virtually any attack will outright kill her unless avoided. Archer is well-equipped to avoid attacks, though, as she has +33% faster cast speed and damage. To succeed as Archer, the player must be very cautious and remember to flee battles whenever necessary.[1] 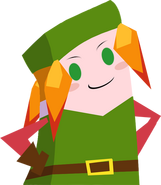 Beta art for Archer
Add a photo to this gallery

Retrieved from "https://coin-crypt.fandom.com/wiki/Archer?oldid=6342"
Community content is available under CC-BY-SA unless otherwise noted.