Assassin is a straightforward character focused on offense. She specializes in dealing damage at the expense of healing less when using recovery coins. She is often one of the first characters to be unlocked and is slightly more difficult to use than Adventurer.[1] 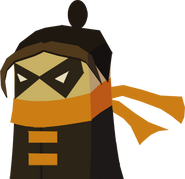 Beta art for Assassin
Add a photo to this gallery

Retrieved from "https://coin-crypt.fandom.com/wiki/Assassin?oldid=6553"
Community content is available under CC-BY-SA unless otherwise noted.