The Executive gets both an advantage and major disadvantage in offense: She heals only half damage when attacking, but steals a coin every time she hits. She also gets 50% more coins at the end of each battle and can find 20% more coins in chests, which help offset the additional coins she will be using.

Despite her damage penalty, her playstyle is very offensive and she will often take offensive coins instead of redundant stealing coins.[1] 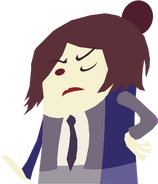 Beta art for Executive
Add a photo to this gallery

Retrieved from "https://coin-crypt.fandom.com/wiki/Executive?oldid=6796"
Community content is available under CC-BY-SA unless otherwise noted.