Shroud is a class that completely relies on enemies for coins. Every time Shroud is hit with an enemy coin, they will absorb that coin after they receive its effect. In addition, Shroud earns double the normal amount of coins at the end of every battle and cannot take coins from chests under normal conditions. For the player to succeed when playing Shroud, they need to have a strong grasp on the battle mechanics of Coin Crypt.[1] 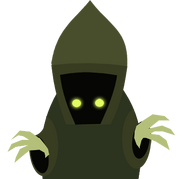 Beta art for Shroud
Add a photo to this gallery

Retrieved from "https://coin-crypt.fandom.com/wiki/Shroud?oldid=6348"
Community content is available under CC-BY-SA unless otherwise noted.