Thief is a moderately difficult character centered around obtaining more coins. She recieves more coins after battles and can find more coins in chests, but only has a 6 Max HP. Because of this, she risks running out of HP sooner than running out of coins.[1] 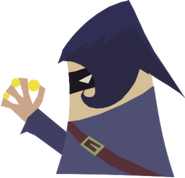 Beta art for Thief
Add a photo to this gallery

Retrieved from "https://coin-crypt.fandom.com/wiki/Thief?oldid=6344"
Community content is available under CC-BY-SA unless otherwise noted.