Vampire, like Ghost, is a class that plays with a constant sense of urgency. He constantly looses health in-battle, but can gain more back by attacking foes. For every 2 damage dealt, Vampire will gain 1 HP. Because of this, Vampire will often play very offensively in favor of using healing or shielding coins.[1] 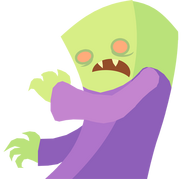 Beta art for Vampire
Add a photo to this gallery

Retrieved from "https://coin-crypt.fandom.com/wiki/Vampire?oldid=6339"
Community content is available under CC-BY-SA unless otherwise noted.